skip to main | skip to sidebar

After many years, I have rediscovered this site where some nice "recommendation" letters were posted, and I hope your discovery of this site may add to your appreciation of the opportunity for the experience of "George Washington LIVE!" speaking to your group.
Please scroll down, and click on the image of the letter or note for an enlarged view...
Posted by J R "States" Manship at 2:54 PM No comments:

[Please "Click" on the image of each page shown below to enlarge each one,
then "Click" again to magnify the image further for your ease in reading.] 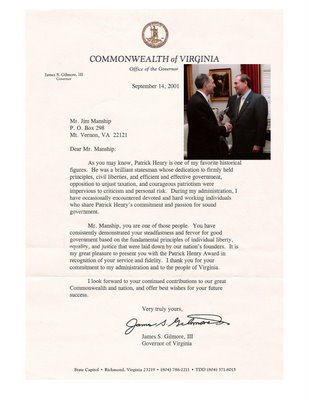 ...the Caped Crusader for this Constitution,

...the "Man for the Millenniums"
(The most important man in the world in the past 1000 years!)

...the man described by "Common Sense" author Thomas Paine as "The World's Apostle of Liberty".

...the man King George III said Washington was "the greatest man of his Age, or perhaps, any Age" after Washington raised "the standard to which the wise and honest can repair" when he refused to succumb to the seductions of power and become king of America.

...the man described by his nearby neighbor along the Potomac, a man in his own rite a great American patriot as Governor, General, and Congressman Henry ("Light Horse Harry") Lee, father of Virginia's other favorite son, General Robert E. Lee, who spoke in Congress on 26 December 1799 about Washington as "First in War, First in Peace, and First in the Hearts of his Countrymen. He was Second to None...".

See the commendatory words of Governor of Virginia James Gilmore, of 30 year High School History Teacher and elected Virginia Delegate Lee Ware, of the president of a retired servicemen's military history club, and of an active duty Air Force Lieutenant Colonel and father of a fine boy who generously gave over $1000 at the "Millennium Militia Man" level.

You will see by your reading these letters the powerful service being given by George Washington LIVES!, a service worth much to the future of America, and worthy of support of your company, your charitable foundation, or your family trust.

Then if you are a corporate leader, consider taking the lead to invest in the future of America by investing in George Washington LIVES! with a corporate sponsorship of GW going to schools to bring History alive! to underwrite a series of performances in schools, where your company can even get positive name recognition with your company name on handouts from George Washington LIVES!

Remember that a retired militia Colonel of Virginia in 1770, George Washington said,
"History is an essential study to better government." 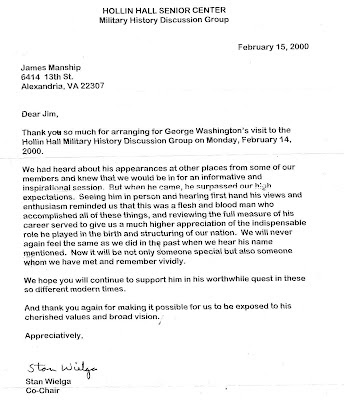 Better government will benefit your company, or your heirs if you manage a family trust. Invest in the future benefits to be gained from a better government and a better future; so
"Now is the time for all good men
to come to the aid of their countrymen,...",
in this case a man who shares the Spirit of George Washington.

Please inquire on how you may invest in the future of America by sending an email inquiry by means of the convenient "envelope" icon below.

During the War for Independence, General Washington had to write many letters to leading citizens to support financially the ongoing efforts to secure our Liberty. The fight for our Liberty goes on today. As Thomas Jefferson wrote,
"Eternal Vigilance is the Price of Liberty."
Your initial or ongoing financial support will further the Cause of Liberty into the future.

"The General" looks forward to forming an alliance with you and your company, or you and your family trust to advance the cause of Liberty and education in this Nation.

For America's future (building up on our past), 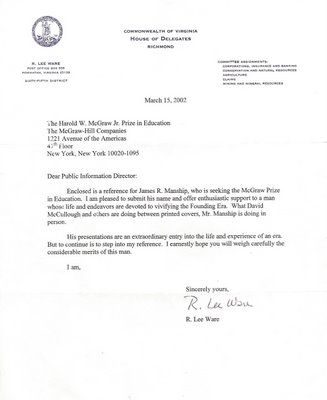 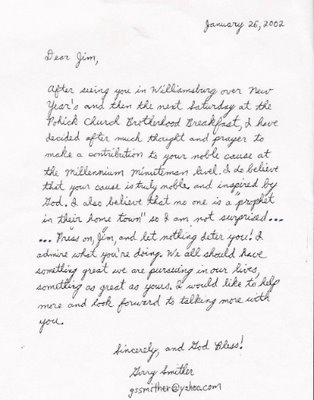 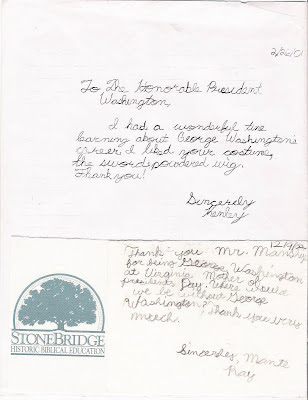 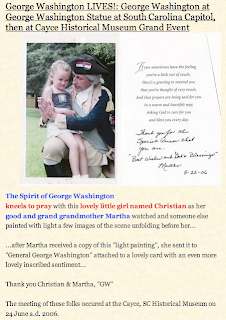 Links to other WISE words...

J R "States" Manship
"Master of American History" per John McCaslin of The Washington Times on 29 Nov 2005; in 2003 wrote a "Revolutionary" Christmas play telling of the true first Statue of Liberty of a black boy soldier - who gave his life for your Liberty; in 2002 in-person history work was compared by Delegate Lee Ware to the work of David McCullough in books; from 1998 to 2001 former member of the Board of Visitors to Mount Vernon appointed by Governor Gilmore. At age 12, wrote a 168 page paper on the War Between The States encouraged by my mentor from church, Ralph McGill. *** McGill was the Publisher of The Atlanta Constitution, and instructed me at age 10 to read and love "tHis Constitution FOR the United States of America" because as a young reporter, McGill witnessed the Austrians vote away their written Constitution for the promises of the government, the Nazi government! I ask how far are we in America from voting away our God given Constitution? *** Ralph McGill received the Presidential Medal of Freedom in a.d. 1964, and the Pulitzer Prize in a.d. 1959. I was blessed by McGill's mentorship for he was called: "The Conscience of the South".